ZE PAK SA Capital Group is a significant electricity producer on the Polish market and an important element of the country's energy system. In terms of installed capacity and electricity production, ZE PAK SA Group is the largest private (uncontrolled by the State Treasury) energy group in Poland, consisting of vertically integrated entities operating in the area of lignite mining, electricity production from conventional and renewable sources, and energy trading.

The Group focuses its activities on several areas. The basic one is the production of electricity from conventional and renewable energy sources, lignite mining, wholesale electricity trading, supplemented by the sale of electricity certificates of origin, activities aimed at ensuring an appropriate number of CO2 emission allowances, and the production and sale of heat. Additionally, within the Group, there are companies dealing, among others, in the execution of construction and assembly works, maintenance works, service, production and trade activities aimed at satisfying the needs and comprehensive service of the industry.

The Group's generation assets include two lignite-fired power plants located in central Poland, in the Greater Poland Voivodeship. Pątnów Power Plant produces energy using lignite in 4 power units with a total capacity of 1,118 MW. Konin Power Plant, a former coal-fired power plant, today mainly uses a block with a boiler dedicated to burning biomass with an installed capacity of 50 MW and produces electricity and heat from biomass. Currently, Konin power plant is modernizing the second unit, which will also be adapted to biomass combustion.

Although ZE PAK's activity is mainly focused on the conventional electricity generation segment in the lignite combustion process, the Company is aware of the challenges that the industry will face in the near future. Therefore, in 2020, a decision was made to adopt the directions of the strategy, according to which the production of energy from coal will be gradually reduced, while projects in the area of energy production from renewable sources as well as the production and use of hydrogen are to be developed. Taking into account the changing legal and environmental conditions, the increasing prices of CO2 emission allowances, and the tightening of emission standards for other substances, the Company is already significantly reducing its carbon footprint. In recent years, a significant decrease in CO2 compared to previous years can be observed. 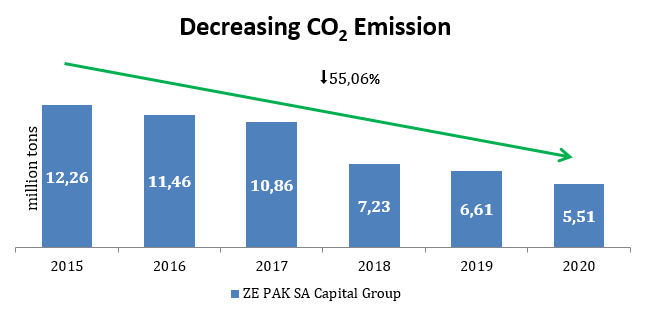 Also in absolute terms, i.e. calculated per unit of electricity production, the Group's emissivity has decreased over recent years.

A typical example of energy transformation in the Group is Konin Power Plant, in which a 50 MW biomass unit is currently operated, and that it will soon be expanded by another biomass unit of similar capacity. The equipment used to burn coal will be partially adapted for biomass burning. Thus, the power plant in Konin will become the first coal-fired power plant converted into biomass in the country. In Konin power plant the electrolyser is also planned to be installed to produce hydrogen. Hydrogen will be produced in the process of water electrolysis using renewable energy sources. The basic energy source for this installation will be a biomass block, which will allow the production of so-called "Green hydrogen". A hydrogen refuelling station will also be built in Konin and Warsaw, where it will be possible to refuel both passenger cars, buses and trucks. In order to enable the supply of hydrogen from the hydrogen plant at Konin Power Plant or from another hydrogen producer to the refuelling station, a mobile hydrogen storage facility has been ordered.

PAK-PCE Fotowoltaika Sp. z o.o. (a subsidiary of the Company) is also carrying out works related to the construction of a solar farm with a capacity of 70MWp, which is located in areas previously used for mining activities. 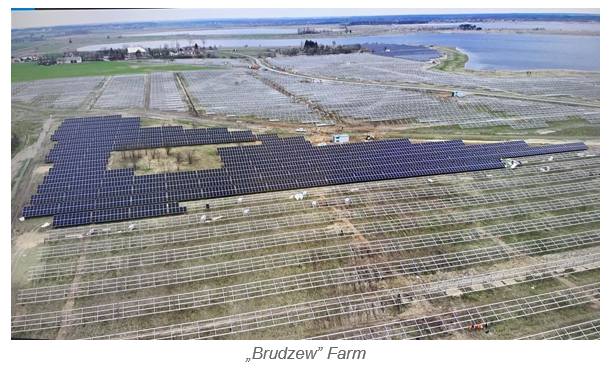 A number of other ideas were also developed in the field of energy production from renewable sources or energy storage. Some of these projects have already been submitted to a special program under the support of EU funds of regions heavily dependent on coal mining (the so-called "Coal Platform"). The company also joined the "Agreement for a just energy transformation of Eastern WIelkopolska", whose signatories, i.e. representatives of local authorities, non-governmental organizations and entrepreneurs, expressed their willingness to cooperate in order to maximize the use of shared potential in the region's transformation process.

In 2020, the power plants of ZE PAK SA Group generated in total 4.9 TWh of net electricity, which was sold as part of bilateral contracts and framework contracts, as well as on power exchanges and on the balancing market. Together with the energy from resale, the Group's sales in 2020 amounted to 6.7 TWh.